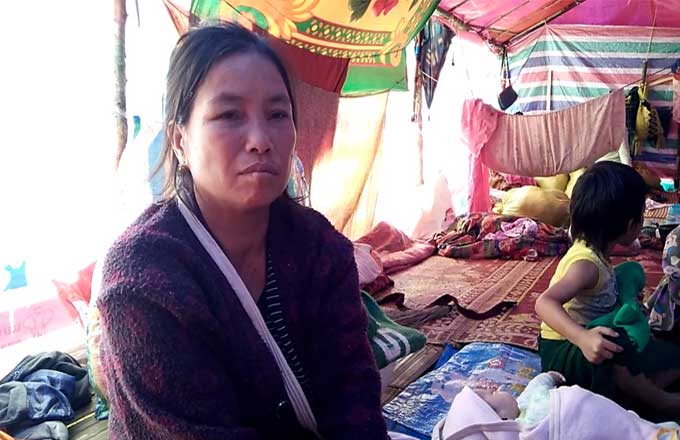 This update documents further incidents of abuse against civilians committed by Burmese government troops during their offensive in central Shan State since early October 2015. SHRF has documented the killing of a displaced farmer on November 13, and the disappearance of another, near Mong Ark, Mong Hsu township. SHRF has also documented the death of a monk, and injury of three novices, on November 30, 2015, due to a land mine assumed to be freshly laid by the Burma Army near one of their bases in Mong Nawng.

On November 13th, 2015, a displaced farmer was shot dead by Burmese government troops when returning to Mong Ark, Mong Hsu township. He was trying to search for his son-in-law, who had returned to tend his farm several days earlier, but had disappeared.

Loong Zu, aged 52, had fled with his family to Wan Hsaw in mid-October, soon after the Burma Army launched an offensive against the Shan State Progress Party/Shan State Army in the area. There was heavy fighting near Mong Ark, causing the entire village of 54 households to flee. Most took shelter in Wan Hsaw, about 3 miles away.

Loong Zu was married with six children. On November 9, his son-in-law, Sai Azeya, aged 29, had gone back to Mong Ark, to try and harvest their crops, but had not returned. Worried about what had happened to him, Loong Zu and his cousin Loong Yaein, set off on foot early in the morning of November 13th, to try and find him. 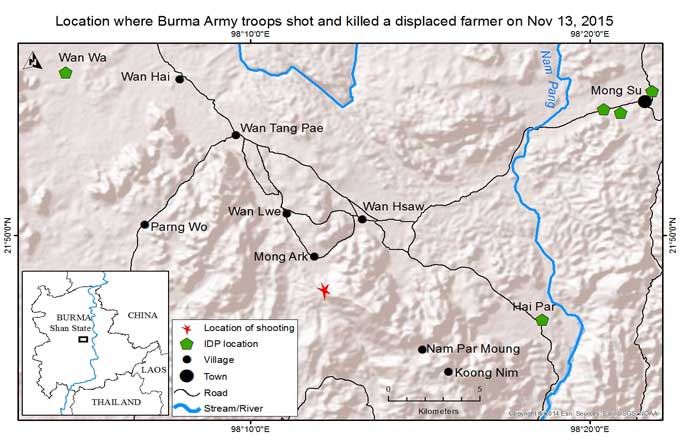 The two farmers dared not take the main road, and were walking along a jungle track to their farm. At about 8 am, the two farmers reached the Huay Nam Oon stream, about a mile from Mong Ark, when they saw Burmese soldiers ahead of them on the nearby Huay Mee Tai hill. Suddenly, the soldiers started shooting at them. Loong Yaein, who was walking behind Loong Zu, saw his cousin being hit in several places by bullets, and falling lifeless to the ground. Terrified, he immediately ran back in the direction he had come. When he reached Wan Hsaw, he informed other villagers of what had happened.

By this time, most of the Wan Hsaw villagers, as well as the IDPs sheltering there, had fled to other areas, due to ongoing shelling and fighting nearby. Loong Zu’s widow and family also left Wan Hsaw, and moved to take shelter in the village of Wan Wa, in Ke See township.

On November 16, SHRF was able to interview Loong Zu’s widow, 48-year-old Pa Joi, in Wan Wa IDP camp. She was deeply upset not only about her loss, but also about the fact that no one had been able to go back and collect her husband’s body and give him a proper funeral, due to the ongoing fighting. She did not know how she was going to provide for her family in the future.

She said: “My husband had done nothing wrong. He should not have been killed. The Burmese soldiers could see he was just a villager. He and my cousin were wearing civilian clothes, yet the Burmese soldiers deliberately shot at them.”

At the time of this report, no one has been able to go back and find Loong Zu’s body, as Burmese government troops remain encamped near Mong Ark. His son-in-law Sai Azeya remains missing, and it is feared he has also been killed.

Burma Army land mine near Mong Nawng causes death of a monk, and injury of three novices

On November 30th, 2015 at about 5 pm, a monk and four novices from Kung Taw Monastery, in the outskirts of Mong Nawng town, stepped on a land mine when going to bathe in a stream near their temple. The blast tore apart the right legs of the monk and one of the novices, and injured two other novices. The monk later died of his injuries. 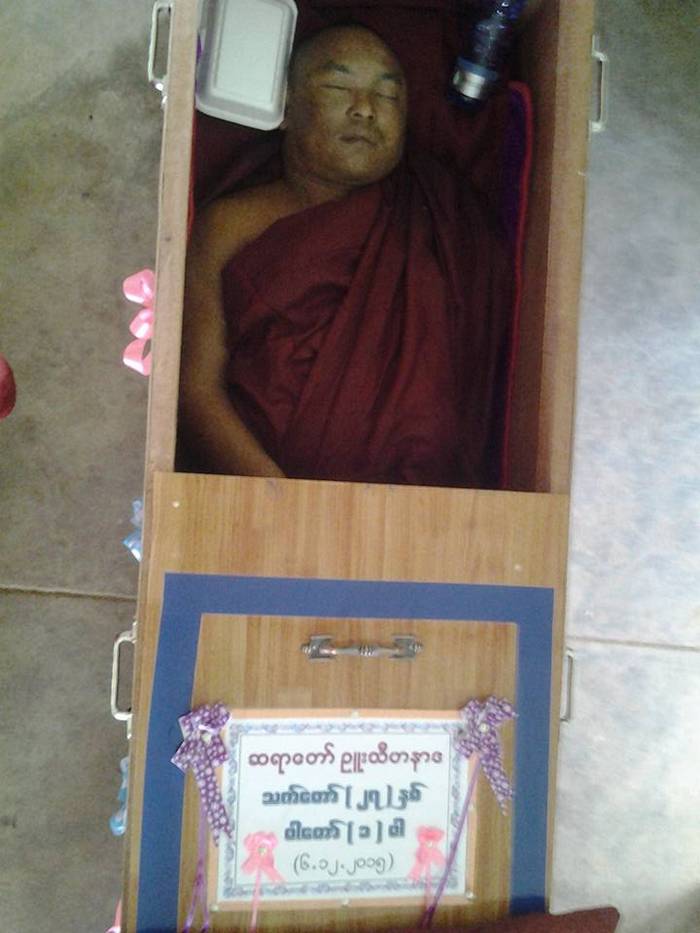 Their names are as follows:

The novice who was not injured ran to get help from other villagers, who took the injured monks to the hospital in Mong Nawng. However, staff there were only able to treat Sao Kaw Sar La, as his injuries were not so serious. The other patients were referred first to Loilem Hospital, and then to the Burmese military hospital at Aung Pan that same night. 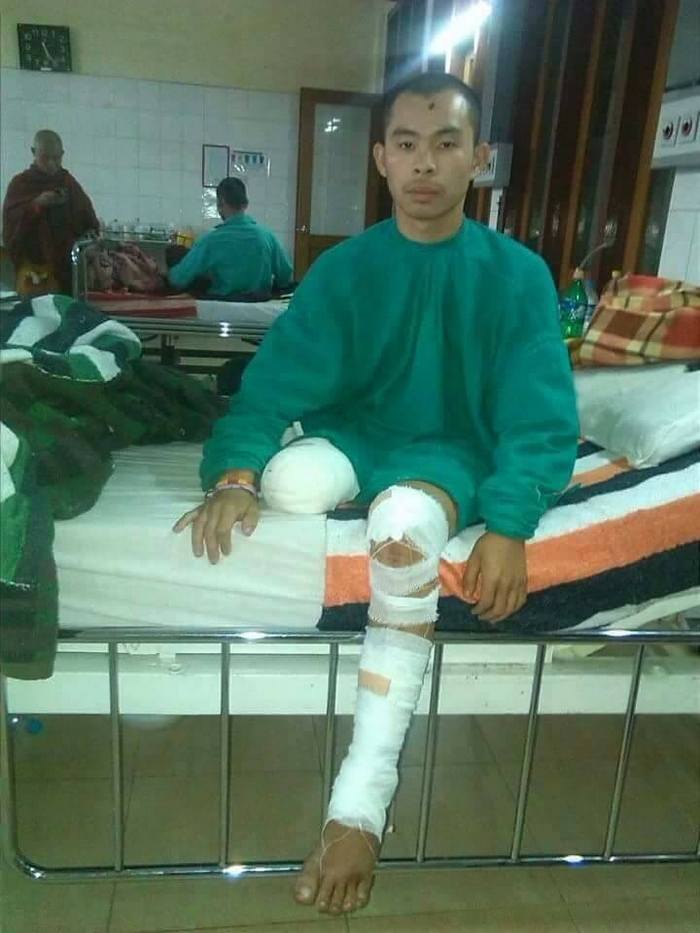 However, Sao Si Ha Na Da failed to recover after his leg was amputated. He passed away in Aung Pan on December 6.

No Burma Army personnel have come to the temple after the incident to offer an apology or accept responsibility, even though it is well known that they had laid fresh land mines around their bases after the start of their offensive against the SSPP/SSA in early October. The land mine that was detonated by the monk and novices on November 30 was at the foot of the hill on which the Burma Army Military Operations Command 2 (MOC-2) is based.

Below is an interview with a local villager, testifying to the recent laying of land mines around Burma Army bases in Mong Nawng.

“They told us we should not come back to the farm, because they were going to lay land mines around their base”

I went to harvest my fields west of Mong Nawng on November 3, 2015, together with my wife and two sons, and eleven other villagers who were helping us harvest. We started harvesting at 8 am, and took a lunch break at midday. At 1 pm, we started harvesting again, when suddenly a group of about 20 Burmese government troops came from the Light Infantry Battalion (LIB) 9 base next to my farm. They said they had found military boot-prints on our farm, and started questioning us about whether they were made by Shan soldiers. Actually, we had no idea whose boot-prints they were. They were probably made by the Burmese soldiers themselves. 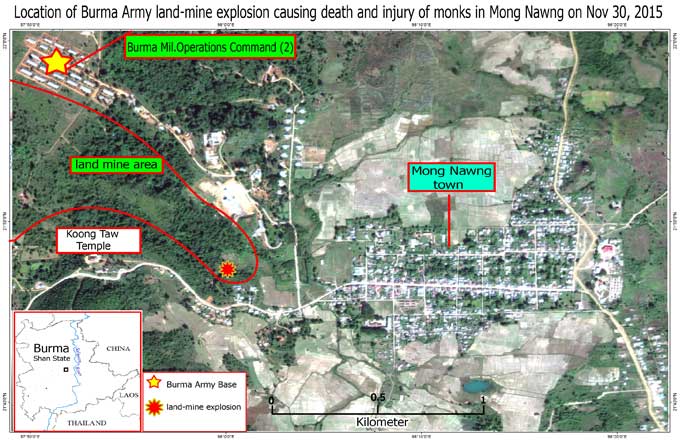 They questioned us for about two hours. They seized Sai Seng Harn, one of the farmers in our group, by his collar, and pointed a gun at him, and tried to force him to confess who had made the boot-prints.

Finally, they let us go, but they told us we should not come back to the farm, because they were going to lay land mines around their base. They said, “If you come back, we will shoot you. Only come back if you are not afraid to die.”

I had to abandon all the remaining rice and corn that we had not yet harvested. I lost about 800,000 kyat (over 800 USD) in income.

After I got back to my home in Mong Nawng, at about 5 pm that same day, another group of Burmese soldiers from LIB 9 came to my house and ordered me to come to the Hsai Leng government school in the town.  There were lots of soldiers at the school. They tied my hands behind my back, and questioned me again about why I had gone to my farm that day. They said: “Why did you go to harvest? Were you harvesting so that you could feed the Shan soldiers?” They questioned me for about one hour.

I also saw two other civilians from the town being questioned. One, called Loong Tun, was accused of cooking for the Shan soldiers. Another, Loong Htwe, who is a doctor, was accused of giving medical treatment to the Wa soldiers.

We were questioned for about one hour, before being released.