By SHRF
November 14, 2015
Share
Facebook
Twitter
WhatsApp
Email
Print
LINE
Viber
Shan Community Based Organisations (CBOs) are gravely concerned at the current offensive by Naypyidaw troops against Shan ceasefire territories in four townships of central Shan State, which has displaced over 1,500 villagers so far.On October 6, 2015, the Burma Army launched a large-scale offensive on territories of the Shan State Progress Party/Shan State Army (SSPP/SSA) in Mong Su and Mong Nawng townships. Heavy fighting, involving over ten Burmese battalions, has caused over 1,500 villagers from these areas to flee their homes and farms. Over 1,000 are sheltering in nearby villages, while hundreds are hiding in the jungles. Four women have given birth in hiding places; one in a cave. The displaced are in urgent need of humanitarian aid and protection. Unable to harvest their crops this season, they are also facing a future food crisis. 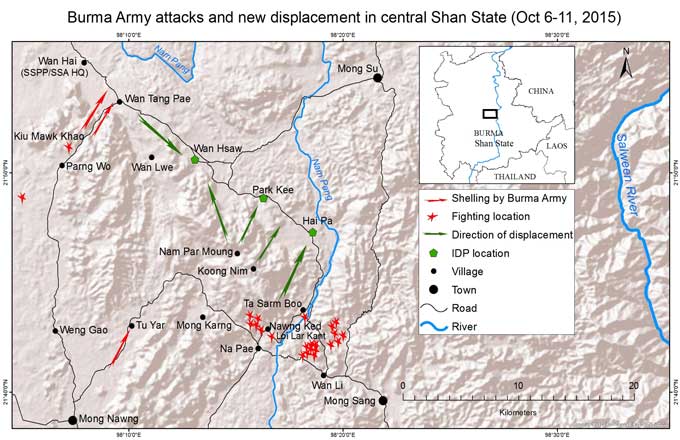 On October 11, 2015, the Burma Army began firing shells towards the SSPP/SSA headquarters at Wan Hai, in Ke See township, endangering thousands of civilians, and in the past few days has reinforced hundreds of troops to the area, causing fears of an imminent ground attack. On October 14, the Burma Army launched a new attack on the SSPP/SSA in the Tangyan area. These attacks are likely to lead to further displacement in the coming days.

Shan CBOs strongly condemn this new offensive, the indiscriminate shelling of civilian areas, and the forced displacement of civilians. These attacks are part of a systematic military operation over the past few years by Naypyidaw to seize territory from the SSPP/SSA, in violation of its existing ceasefire agreement signed in January 2012.

By launching this new offensive just before the signing of the Nationwide Ceasefire Agreement (NCA), Naypyidaw is making it clear that it has no interest in political negotiations to solve the conflict. It is persisting with its decades-long strategy of seizing and occupying the ethnic lands by force. In other words, the current non-inclusive NCA is just a divide-and-rule tactic to temporarily pacify some armed groups while crushing others, and will not bring peace.

Therefore, if the international community wants genuine peace in Burma, it is urgently needed to publicly condemn this new offensive and put pressure on Napyidaw to end its advances into ethnic territories and pull back its troops from these areas.

Endorsed by the following Shan CBOs: