By SHRF
November 12, 2015
Share
Facebook
Twitter
WhatsApp
Email
Print
LINE
Viber
On November 8, 2015, general election day in Burma, government troops shot at a group of farmers returning from harvesting their rice fields in Mong Nawng, central Shan State. A 55-year-old woman and a 15-year-old boy were seriously injured.On that day, about 30 villagers of Wan Hoong Kham, Weng Kao tract, north of Mong Nawng town, had requested permission from the Burma Army base at Weng Kao to go to their fields to harvest their paddy. The commander had given permission, but warned them to return back to their village by 4 pm, because of fighting in the area. 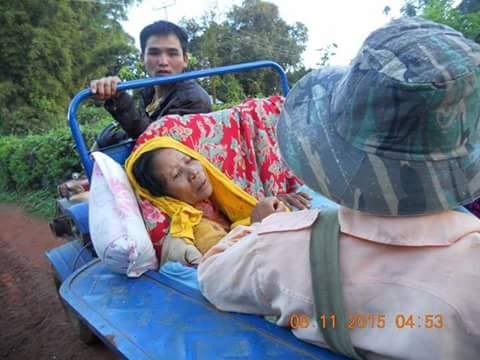 At 3:30 pm, the farmers were walking back from their fields past the Weng Kao base, when two Burmese soldiers came out of the base, and one of them began shooting his rifle at them. Two villagers, Par Dank, aged 55, and Sai Kham Pang, aged 15, were hit by bullets in the neck, causing serious injury.

The other villagers rushed to help the wounded villagers, but some Burmese soldiers then came out of the base and shouted at them to take cover, because there were Shan soldiers in the area.  They therefore had to wait until the headman of Wan Hoong Kham came to the base and pleaded with the Burmese soldiers to let the injured villagers be taken to hospital. Only then, at about 6:30 pm, were they allowed to bring a motorized tractor to transport the victims to Mong Nawng hospital.

Due to the seriousness of their injuries, and the lack of doctors available, the Mong Nawng hospital could not treat them, and referred them straight away to Loilem hospital, 90 miles away. The next day, the Burma Army arranged for them to be moved from Loilem to the Aung Pan military hospital, a further 90 miles away.

Five family members accompanied the injured villagers from Mong Nawng to Loilem hospital. However, when the victims were sent to Aung Pan by the Burma Army, the family members were not allowed to accompany them. They were told that the Burmese military would take responsibility for the patients. Since then, the family members have heard no news of the victims, and are extremely concerned about their condition.

There are about 100 Burmese troops stationed at the Weng Kao base, from Light Infantry Division 66. The base has been used by the Burma Army to stage attacks against the Shan State Progress Party/Shan State Army (SSPP/SSA) since the start of their large-scale offensive that began on October 6, 2015. Shells were fired indiscriminately from the Weng Kao base into the village of Mwe Taw on October 26, seriously injuring a local villager while he was running for shelter.