We, the Shan Farmers’ Network and Shan Human Rights Foundation, demand the prosecution of the Burma Army troops who opened fire yesterday on villagers at a gold mine in eastern Shan State, killing one man and injuring five others. 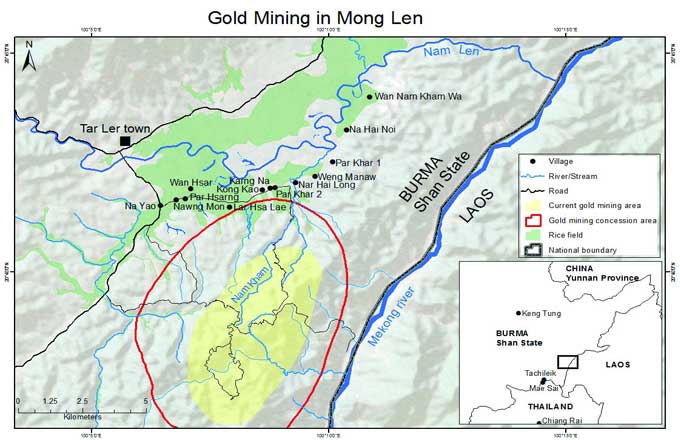 On October 13, 2015, twenty villagers of Na Hai Long village, in Mong Len tract of Tachilek township, went up to the Loi Kham hills, to monitor whether gold mining companies had stopped their operations, as agreed between government officials, mining companies and local villagers since July 2014. Toxic waste from these gold mines has been destroying farmlands and harming the health of local villagers for several years.

After arriving at a mine operated by Loi Kham Long Company, the villagers tried to talk to the manager, but he became angry and went to fetch soldiers of Burma Army Battalion 330, who were stationed nearby. When the villagers saw about 20 armed soldiers coming, they began leaving the area, but as they were walking away, the soldiers started firing their guns at them. The villagers were terrified and ran in different directions. One 50-year-old man called loong Sarm was shot and badly injured. He was taken to Mong Phyak Hospital, where he died. Five other men – Loong Pat, Sai La, Sai Sam, Sai Noi and Loong Inn – were injured from falling down the hillside as they tried to run away. Loong Inn is being treated in Tachileik Hospital.

We are appalled at this use of firearms against villagers who were simply trying to protect their community and natural environment. We demand that the government authorities take immediate action to punish those responsible for this attack.

We also urge the authorities to effectively implement the order to the companies to stop their damaging mining operations and pay proper compensation as demanded and promised by the companies last year.