By SHRF
September 28, 2015
Share
Facebook
Twitter
WhatsApp
Email
Print
LINE
Viber
On September 12, 2015, about 100 Burmese government troops attacked Nawng Pa Deb village in Mong Pawn township, southern Shan State. They fired shells indiscriminately into the village, injuring four men and two women; one of the men later died from his wounds. On entering the village, they kicked and beat one of the injured villagers, whose leg later had to be amputated, and deliberately shot dead an elderly grandmother. They looted money and possessions from the village, and forced four of the villagers to be their porters. 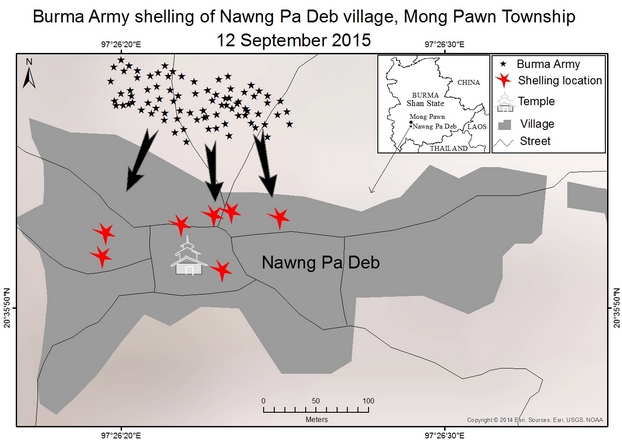 The attack took place during an operation launched by Burmese troops since early September to drive out the Restoration Council of Shan State/Shan State Army (RCSS/SSA) from the southern Mong Pawn area, despite an existing ceasefire.The fact that Burma Army is not only launching military offensives, but also committing grave abuses against civilians during this crucial time of nationwide ceasefire negotiations, throws serious doubt on their sincerity towards the peace process.SHRF denounces these attacks and abuses against civilians as war crimes, and demands that those who  these crimes be held responsible.

On September 12, about 100 soldiers from three battalions: Battalion 12 (based in Loilem), 422 (based in Kalaw) and 517 (based in Mong Pawn), arrived outside the village of Nawng Pa Deb, about 18 miles south of Mong Pawn town, Loilem district. They positioned themselves on a hillside to the north of the village, which has about 200 households. 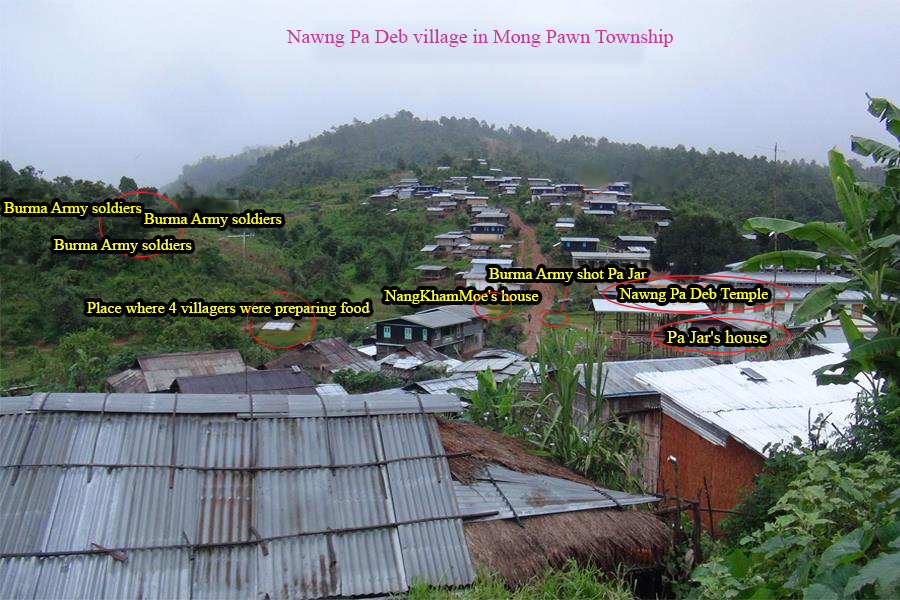 At about 10.20 am, a villager from Nawng Pa Deb walking to his farm, met the soldiers on the hillside. The soldiers asked him: “Are there Shan soldiers in your village?” He replied that there were none, and carried on walking. However, after only about five minutes he heard the sound of shelling, as the soldiers began firing 60 mm mortar shells into the village. 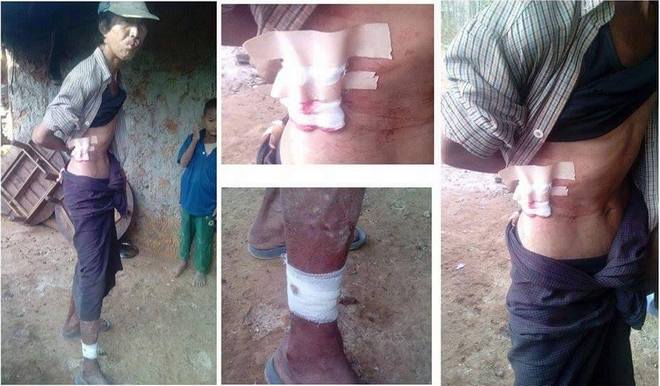 Lung Pay who was hit by shrapnel from shelling

Two shells exploded next to a house near the village temple, injuring four men preparing food outside for a merit-making ceremony. The injured villagers were:

Sai Dong was too injured to move, but the other three men ran away in terror, and hid in the jungle outside the village.

Two shells landed near the house of a 28-year-old woman called Nang Kaw, who was nine months pregnant. She was just about to enter her house when the shells fell, and was injured in the leg, causing her to faint.

Another shell landed near the house of a 25 year old woman called Nang Kham Moo. She was outside her house at the time, and was injured in her right hand. 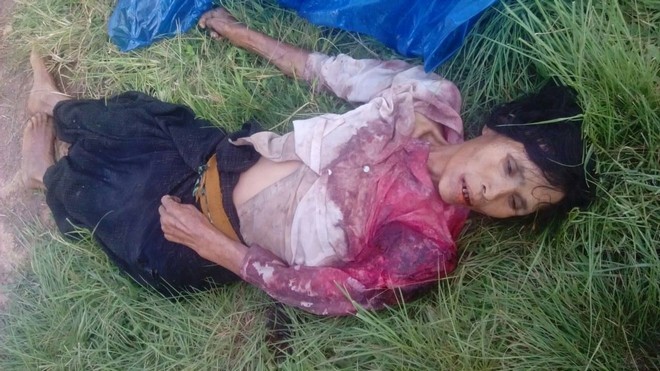 A further two shells landed in the temple compound, fortunately not injuring anyone, but damaging the temple building.

The sound of the shelling caused most of the villagers to run out of the village and hide in the surrounding jungle. Only a few remained hiding in their houses, or in the temple.

After firing shells, the troops advanced into the village, going from house to house, apparently searching for Shan soldiers.

A group of about eight soldiers found Sai Dong, who had been injured by the shelling, lying on the ground. They forced him to put on camouflaged trousers, kicking and beating him when he resisted, then took photos of him and left him. They did not try to get him medical help.

The same group of soldiers then walked towards the temple. When they were about 50 meters from the temple, they saw a 56-year-old woman called Ba Jar entering the temple compound. Her house was next to the temple, and she was going to look for her young grandson, in case he was hiding in the temple.

Villagers hiding nearby saw one of the soldiers deliberately aim his rifle at Ba Jar and shoot her. She was hit in the chest and died instantly.

After killing Ba Jar, the soldiers walked up to her body, checked she was dead, covered her with a piece of plastic and left her lying on the ground.

Ba Jar who was deliberately shot dead by a Burmese soldier

The soldiers then entered the temple, and began searching through all the rooms, emptying cupboards, bags, and firing their rifles.

The deputy abbot, who had fled after the shelling, then returned to the temple. Finding Ba Jar’s body, he went up to the soldiers and said to them: “Why did you shoot her? She didn’t do anything wrong! You shouldn’t kill innocent villagers!”

However, the soldiers did not apologize for the killing. One of them just questioned the monk about how old he was, and where he had studied.

During this time, other soldiers searching around the village were looting possession from houses and shops. When villagers returned, they found that gold, jewelry, money, food, clothing, household items, and chickens had been stolen from at least ten houses and two shops. One villager found that his horse had been shot dead.

Most of the villagers were too scared to complain about their losses, except a woman called Ba Khin, who could speak Burmese. When she found that 1,500,000 kyat (over USD 1,500) of her money had been stolen from her house, she went to search out a commanding officer, and demanded her money back. The officer then questioned his men, and her money was returned, but the officer told her not to report the theft to anyone.

By about 1 pm, most of the Burmese soldiers had gathered together in the temple. At that time, a group of villagers, four men and five women, were returning from their fields to the village. As they were walking near the temple, the soldiers ordered the men to come into the temple. The men were then forced to accompany them as porters. The names of these men were:

At about 2 pm, all the soldiers left the village, with the four porters. They walked to the east, and after about one hour, an officer ordered Lung Pay to go back to Nawng Pa Deb village and call the village headman to come to Long Khin village, where they were headed. He said that killing Ba Jar was a mistake, and he would pay 300,000 kyat (about USD 300) compensation to the headman if he came.

Lung Pay then returned to Nawng Pa Deb village and gave the message to the headman, but the headman did not dare go and meet the soldiers.

At about 4 pm, the soldiers reached Long Khin village. They slept in the village, several soldiers in each house. The next morning, the three villagers were allowed to return to Nawng Pa Deb. Before they left, an officer gave them an envelope with 100,000 kyat (about USD 100) in it, and asked them to give it to Ba Jar’s family.

The previous day, after the soldiers had left, the villagers had gone to take care of those who had been wounded in the attack, and arranged a funeral for Ba Jar. Unfortunately, there were no vehicles in the village, so they had to wait till September 13 before a pick-up truck from another village could transport the wounded villagers to hospital in Mong Pawn. 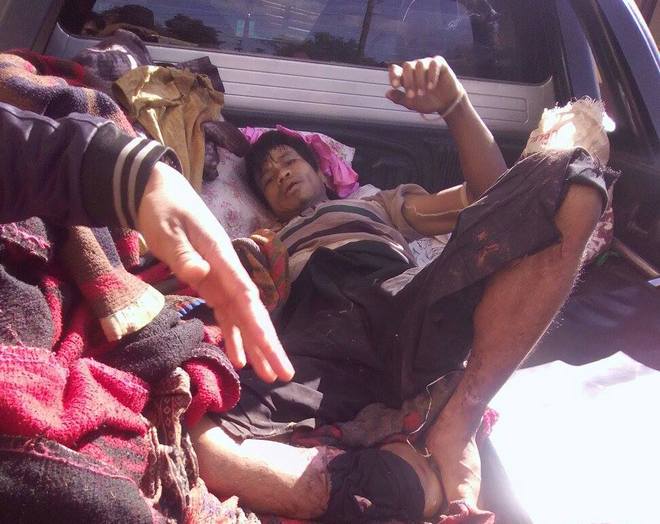 The hospital in Mong Pawn could not treat Sai Dong’s injuries, so he was sent on to Taunggyi hospital, where they amputated his right leg at the knee. He was later transferred to Mandalay Hospital on September 19, as his right arm was still in a critical condition. No military authorities have asked about his condition, or have offered to pay any hospital costs. 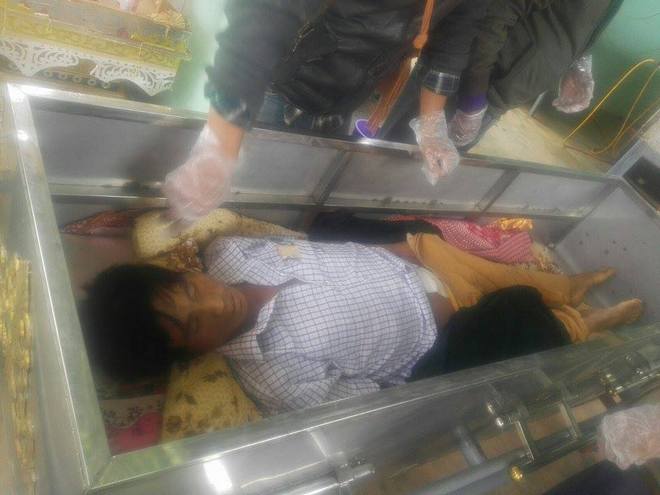 Sai Sarng Shwe, who had been hit by shrapnel at the same time as Sai Dong, stayed at Mong Pawn hospital, as doctors at first thought that his injuries were not life-threatening. However, the wound in his stomach became badly infected and he passed away on September 19, 2015. There has been no offer of help from any military authorities. Sai Sarng Shwe was married, with three young children