Extrajudicial killing, arbitrary arrest, looting by Burma Army during operations against SSPP/SSA in Nawngkhio, Hsipaw and Mong Hsu in October 2016

This update documents the following abuses committed by the Burma Army against civilians in three townships of northern Shan State while carrying out operations against the Shan State Progress Party/Shan State Army in October 2016: 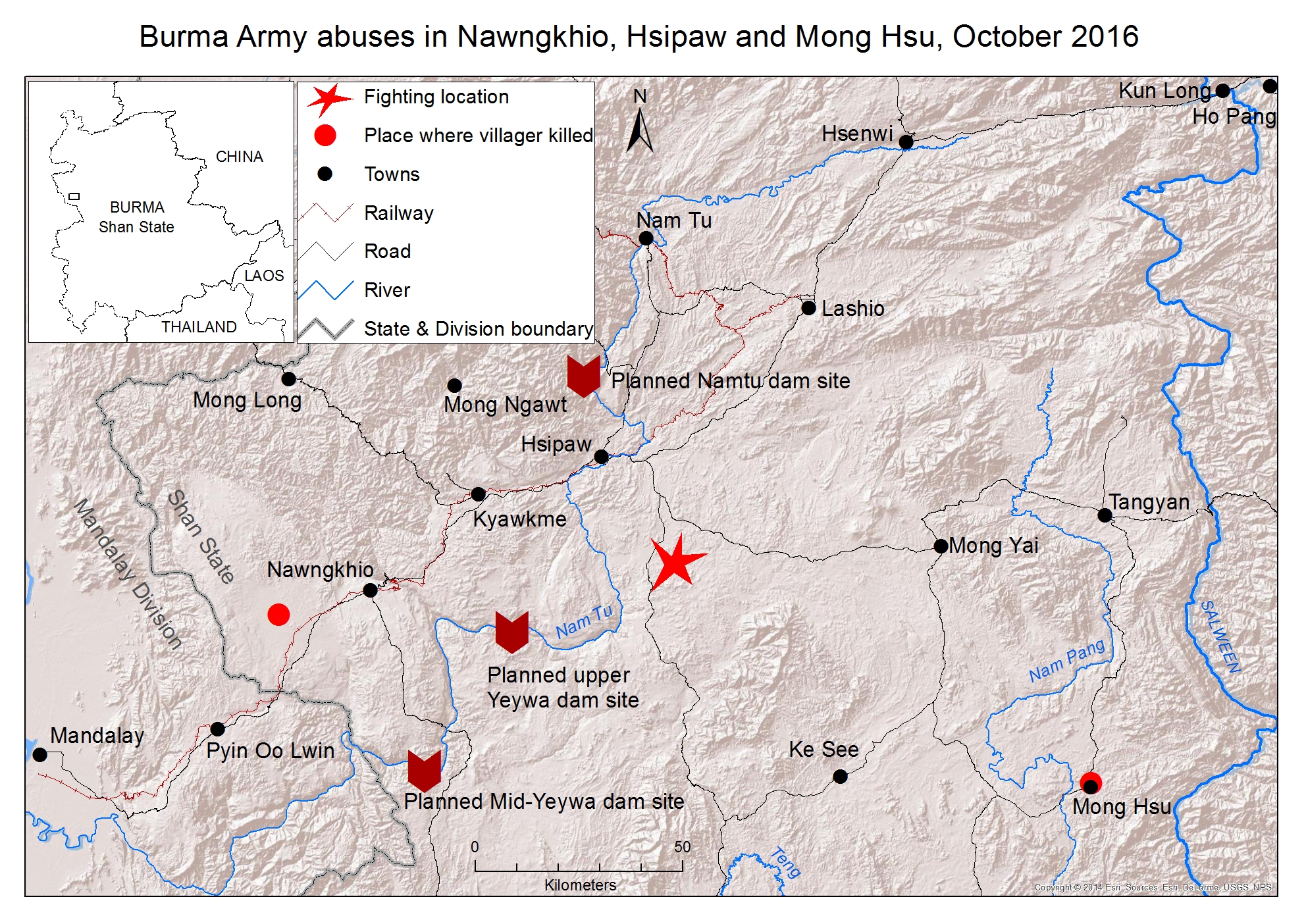 On October 10, 2016, a 27-year-old villager was killed and another arrested, and on October 20, a 52-year-old farmer was arbitrarily arrested by Burma Army troops based in Nawng Khio, northern Shan State, during operations against the SSPP/SSA.

On October 10, at about 1.30 pm, eight local villagers (who worked part-time for SSPP/SSA but were not soldiers) were driving in a car from the village of Sarm Ser, 15 kilometers west of Nawng Khio town, when they were attacked by about 40 Burma Army troops from LIB 114 and 115, who fired rifles and mortar shells at them. The villagers stopped the car and ran away, but were followed by the Burma Army troops. The troops fired after them as they ran through the villages of Wan Kawng and Loi Khwang, and bullets damaged some of the villagers’ houses in Wan Kawng.

Six of the villagers from the car were able to escape, but 27-year-old Sai Swe, from Wan Lang Noam, was shot and killed by the Burma Army just outside Loi Khwang village. Local villagers found his body that evening with multiple bullet wounds. Another villager, 18-year-old Sai Jaw, also from Wan Lang Noam, is believed to have been arrested. His whereabouts are unknown.

The Burma Army attack caused about 50 villagers from the area to flee to nearby villages and to the town of Nawng Khio, where they sheltered for three days, before returning home.

On October 20, a 52-year-old farmer from the village of Hsum Hsai, close to where the October 10 attack had taken place, was arrested by the same Burma Army troops, on suspicion of collecting taxes for Shan troops.

On October 19, the farmer, Lung Shwe Kham, had returned home to Hsum Hsai, after receiving hospital treatment for gall stones in Mandalay. That night, around 2:30 am, two trucks of troops of Burma Army LIB 114 and 115, arrived at Lung Shwe Kham’s house. About 40 soldiers surrounded the house, and banged at the door and the windows, causing two windows to break.

When Lung Shwe Kham got up and opened the door for them, they came inside the house, and told him he was under arrest. They tied up his hands and accused him: “You are connected with Lung Tun, who collects tax for Shan soldiers, right? Someone sent us a letter saying you were in contact with him.”

Even though Lung Shwe Kham told the Burmese soldiers that he was just a farmer, and did not collect taxes for Shan soldiers, they did not listen to him.  The only other person in the house at the time was Lung Shwe Kham’s wife, Ba Tin Ngwe, aged 46, as their three children were all studying in Mandalay. She was ordered to sit down while her husband was tied up.

The soldiers then searched around the house until 4:50 am, while waiting for the chairman of Hsum Hsai tract, U Sein Lwe, to sign that they had not taken anything from the house.  After that, they left the house at around 5:00 am, taking Lung Shwe Kham with them. His wife was not told where Lung Shwe Kham would be taken.

On October 22, Lung Shwe Kham ‘s brother-in-law, Lung Kyaw Joe, and former Shan Nationalities Democracy Party MP Sai Phu Aung went to the LIB 114 base at Nawng Khio, and asked to see Lung Shwe Kham. They were informed he was in the base, but they were not allowed to see him.

SHRF is gravely concerned at the ongoing military operations against the SSPP/SSA, which has a bilateral ceasefire with the Burmese government, and at the fresh Burma Army abuses against civilians on the pretext of contact with the SSPP/SSA, despite the SSPP/SSA’s active participation in the current peace process.

SHRF calls for the Burma Army to be held accountable for the extrajudicial killing of Sai Swe and demands the immediate release of Sai Jaw and Lung Shwe Kham. 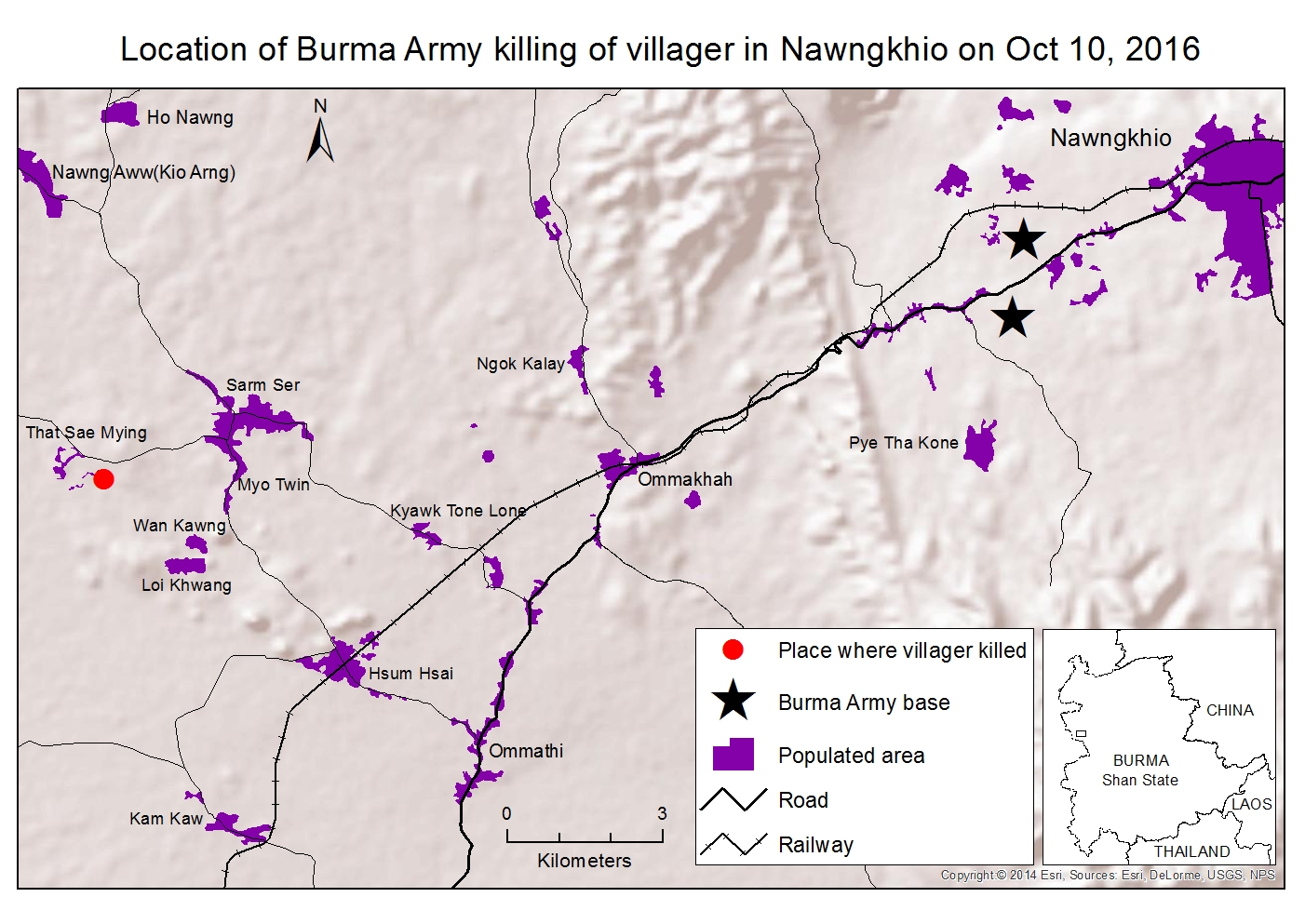 On October 23, 2016, over 120 Burma Army troops from LIB 147 and LIB 291 based at Nam Pawng attacked SSPP/SSA troops near the village of Na Law, (10 miles south of Hsipaw), causing over 2,000 civilians from seven villages to flee to Hsipaw and nearby villages. Burmese troops then looted property from the houses of villagers in Na Law. This was witnessed by villagers hiding near the village.

The fighting broke out at 7.00 am and lasted about one hour. Fearing the Burmese troops, villagers from Na Law, Zay Khan, Nam Part, Nam Kha, Nam Khieo, Nam Hoak, Wan Khai, Wan Khu fled to monasteries in the area for about one week .

List of people whose property was looted in Na Law village

The numbers of displaced villagers sheltering in various monasteries on October 24, 2016, were as follows: 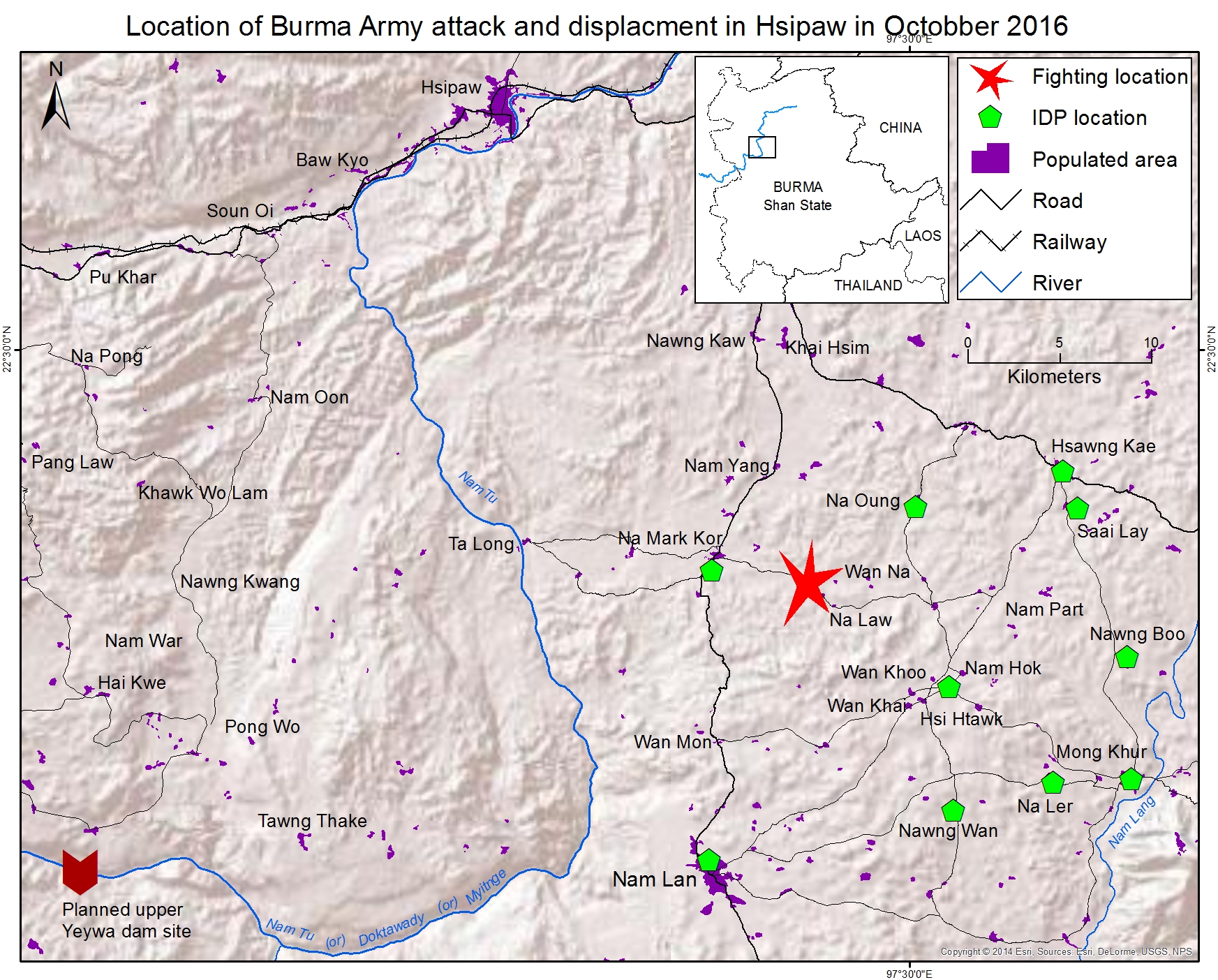 On October 26, 2016, a 40-year-old farmer riding a motorcycle was shot dead by Burma Army troops when he drove past a military checkpoint.

The farmer, Lung Su, had driven a motorbike with his son to Mong Hsu town from his village of Wan Kho Joam, Pang Joi tract, Mong Hsu township, to pick up another motorbike that they had left to be repaired since October 23.

After picking up the motorbike from the repair shop, Lung Su gave his son some money to buy food, and drove the repaired motorbike towards his home.

When he was about 30 yards past the military checkpoint, witnesses saw the soldiers at the checkpoint shooting at Lung Su. A bullet passed through the nape of his neck and out above his right eye, killing him instantly.

Hearing the shooting, some people nearby came to the checkpoint to find out what had happened. The police did not allow them past the police checkpoint, and told them that a man on a motorcycle had been shot by the army. When questioned about what happened, they said, “We told him to stop, but he did not stop. The soldiers wanted him to stop, but they did not intend to kill him. They shot into the air.”

At about 11 am, Lung Su’s son was on his way home, having bought food, when he arrived at the military checkpoint. He saw two army trucks and many soldiers at the checkpoint, and a body lying at the side of the road, which had been partially covered with a plastic sheet. He recognized his father’s trousers on the body, and realized his father had been shot. He quickly drove home to his mother, who was out in their garden planting vegetables, and together they came back to town, but by that time the body had already been moved by truck to Mong Hsu hospital.

Two trucks of police and soldiers went with the truck to the hospital, where a nurse cut open the wound on Lung Su’s head, then the body was locked in the mortuary.

At about 1:30 pm, twenty of Lung Su’s relatives from Wan Kho Joam village, came to the hospital, but they could not see the body at first, as the mortuary was locked. Later, five policemen came and ordered them to bury the dead body immediately. They said there was no need to put him in a coffin.

However, Lung Su’s wife, Ba Aung, told the police that they could not bury him without putting him in a coffin. She told them it was their custom to keep the body for three days or a week, and invite some monks to hold a ceremony and make merit for him. After that, they let the family arrange a coffin, and at 3.30 pm, the family invited three monks from Mong Hsu monastery to come to the hospital and hold a small ceremony, then buried his body at Mong Hsu cemetery.

According to his family, when he left home he was carrying 10,000,000 kyat (USD 7,760), as he was intending to buy buffalos and cows if he met some cattle traders. He was also wearing a gold watch and carrying a cellphone, but when his body arrived at the hospital, the hospital staff said that they only found 186,000 kyat (USD 144) on him.

The police informed the family that his motorbike and cellphone were being kept at the police station, and could not be collected yet by the family members.

Lung Su’s wife said she had not been offered any compensation by the authorities. The family held a memorial ceremony for Lung Su on November 1 and 2, 2016.

Lung Su’s wife said: “We want to publicize this case widely to let people know that the Burma Army commits human rights abuses against innocent civilians. My husband had done nothing wrong. Because we live in a “black zone” (fighting area), nobody dares to speak out against the Burma Army. Even though some villagers and some workers who were repairing the road saw what happened, they don’t dare speak out about this.”

Lung Su used to be the headman of his village. He is survived by his wife and two children, his 20-year-old son, and his 18 year old daughter.

There has been a military build-up by the Burma Army around Mong Hsu in the past few months, as part of operations against the SSPP/SSA in this area.

SHRF deplores this shooting of an unarmed civilian by the Burma Army, and the cruelty of the military and police authorities in forcing his family to hold a quick funeral. SHRF demands a transparent investigation into this incident, and for the Burma Army to be held responsible for the killing of Lung Su. 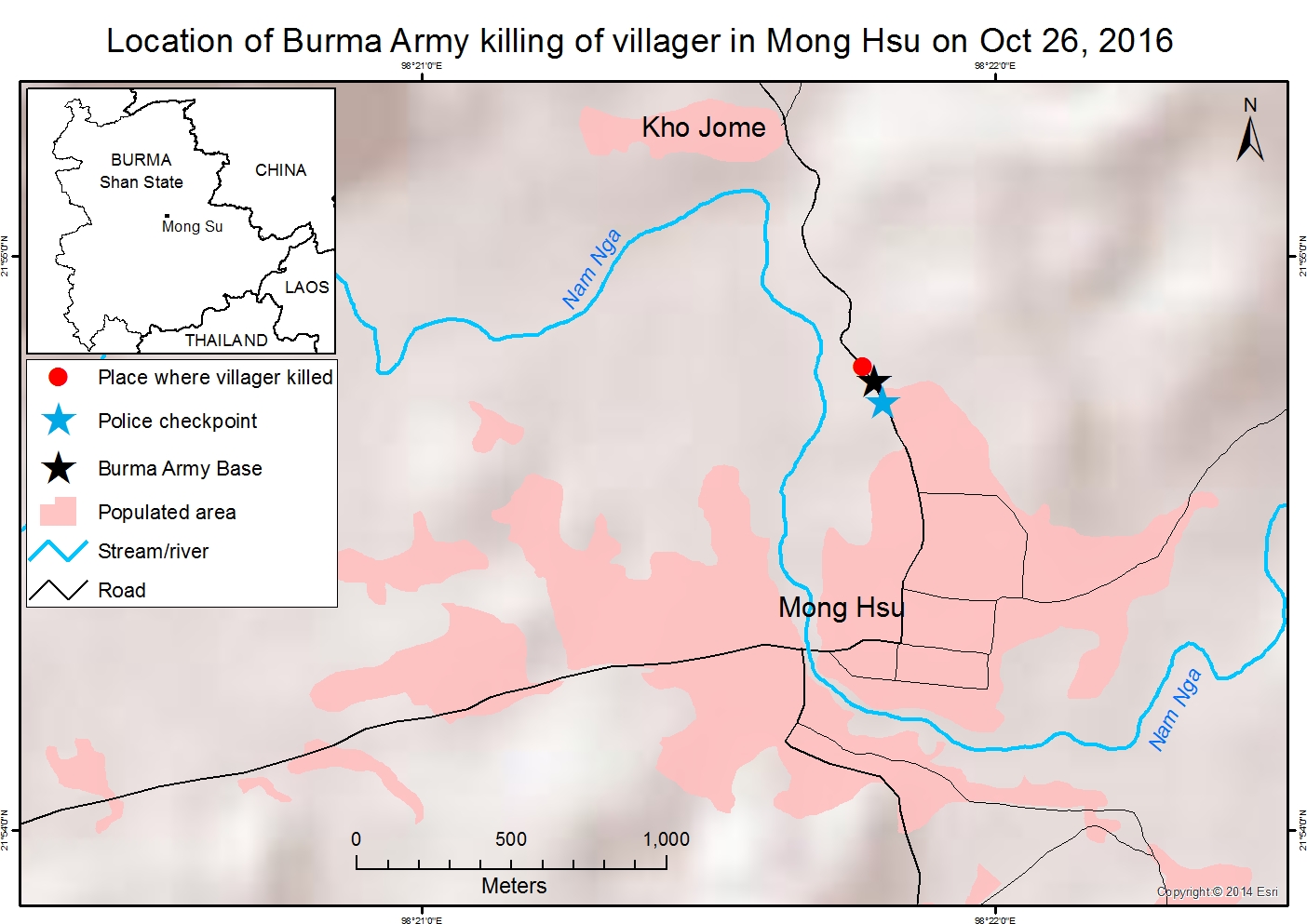