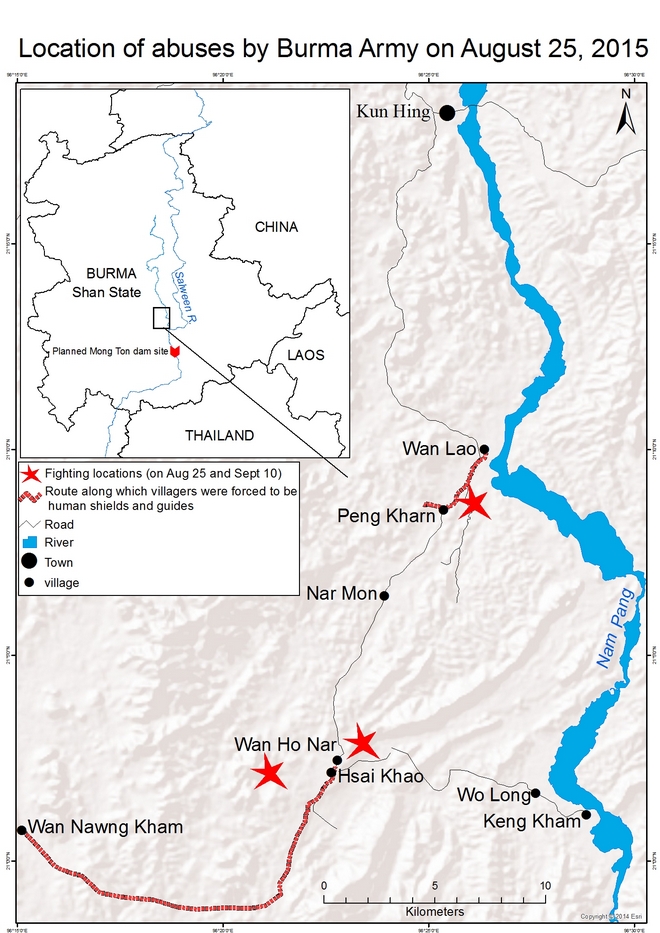 The operation is likely linked to plans by Chinese and Thai companies to build a giant hydropower dam on the Salween River, which will flood large areas of Kunhing. Local residents have shown strong resistance to the dam, and on August 25, the same day as the fighting, handed over 27,000 signatures opposing the dam to the Australian company, Snowy Mountains Engineering Corporation (SMEC), which has been attempting to carry out dam impact assessments.Kunhing was the township most impacted by the large-scale forced relocation by the Burma Army of over 300,000 people in eleven townships in southern Shan State in 1996-1998. In southern Kunhing alone, over 47,000 villagers were driven at gunpoint from their homes, and over 300 villagers killed, as part of an anti-insurgency campaign targeting the Shan resistance. On a single day, June 16, 1997, a total of 56 villagers were massacred in two locations. (See SHRF’s 1998 report “Dispossessed”   http://shanhumanrights.org/old_version/index.php?option=com_content&view=article&id=192:dispossessed&catid=36:reports&Itemid=56).The majority of Kunhing villagers displaced since 1996 still do not dare return to their homes; many remain as migrants/refugees in Thailand. For those that have returned and attempted to rebuild their lives, the recent clashes and abuses are instilling fears that the Burma Army will renew its scorched earth tactics in southern Shan State, despite ceasefires.

On September 10, 2015, there was another outbreak of fighting south of Kunhing when a new unit of Burmese troops, from Battalion 149 in Murng Hsu, was deployed into the area.

Details of the recent abuses are as follows:

1. Villagers in Hsai Khao forced to be human shields

On August 25, 2015, after fighting at about 10 am between troops from Burma Army Division 99 (based in Larngkhur) and RCSS/SSA-S near Hsai Khao, 25 miles south of Kunhing town, the Burmese troops entered Hsai Hkao to take care of their wounded at the local monastery.

When they reached the monastery, there were already 15 villagers at the monastery, including ten women, organizing a merit-making ceremony. They ordered these villagers to stay in the temple, and called another ten male villagers from their houses to also come and stay in the temple as “human shields” to prevent further attacks by the RCSS/SSA-S. While there, they blamed the villagers for having called the RCSS/SSA-S to come and fight them earlier in the day.

At 5 pm that same day, they ordered seven of the villagers, including the headman, to accompany them as human shields as they walked to the Palaung village of Wan Noung Kham, about 12 miles away. The villagers were ordered to bring their own bundles of supplies, and the headman rode his ox-cart.

On the way, the troops ordered three more local Shan farmers working outside the village, and a Karen lumberjack working in the jungle, to join the group as shields.

The names of the ten Shan villagers forced to accompany the Burmese troops are:

When the group reached Wan Noung Kham at about 10.30 pm at night, the Burmese troops ordered the villagers accompanying them to try and find a truck or car for them in the village, but none was available. The villagers slept that night in Wan Noung Kham, and the next day were allowed to return to their village.

2. Villagers in Wan Lao forced to be “guides”, one kicked and slapped

At about 7 am on August 25, 2015, about 35 troops of Burma Army LIB 246 (based in Kunhing) forced two villagers from Wan Lao, 17 miles south of Kunhing, to accompany them as guides to the village of Peng Kharn, about three miles away.

The two villagers’ names are:

Along the way, the troops ran into the RCSS/SSA-S and fighting broke out. After the clash, the Burmese troops carried on to Peng Kharn, and when they arrived there, Lung Law was kicked and slapped by one of the Burmese soldiers, who accused him of leading them into an RCSS/SSA-S trap.

The two villagers were released back to their village at 3.30 pm that day.